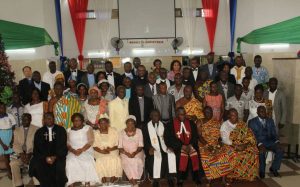 Thirty personalities were on Sunday, 17th December, 2017 celebrated for their contribution toward the development of the Presbyterian Church of Ghana over the years at the first National Awards Day instituted by the Church.

At the ceremony held at the Eternity Congregation, Apenkwa in the Ga West Presbytery, Accra. The church presented citations to the individuals and couples for supporting the church financially and in areas of education, health, evangelism, social services and infrastructure, among other areas.

The awardees included church members, Ministers of the gospel and others who are not Presbyterians, but whose work had a positive impact on PCG’s activities.

On the theme “Anointed to Serve “ the Acting Moderator of the PCG, Rev. Dr. Victor O Abbey urged Christians to let the anointing bestowed on them reflect on their life everywhere and not just in the church.

“If you are anointed, it is not just for the singing, dancing or worshiping in church, but that anointing should reflect in your work. If you have been entrusted with a position use that to serve and liberate people. That will show that you are an anointed Christian,” he said.

He intimated that Christians could only propagate the gospel and bring people closer to God if they lived exemplary lives.

“You cannot tell people not to drink if you are drinking. Before you can go out to preach the gospel, apply the dictates of the Bible to yourself first, he said.

Rev. Dr. Abbey noted that no person is an accident in life or afterthought, and that no matter the circumstance by which one came to this world, the fact remains that God has a purpose for each and every one.

“There is mission for your life and an anointing on your life to accomplish that mission”, he stressed

He thanked the awardees for championing the work of God and urged others especially the youth to emulate their good works by dedicating their lives to God.